What a night! Being nominated for song of the year more than once in a songwriter’s life is a big freakin’ deal.  I wore a purple dress instead of my usual black to celebrate the occassion. 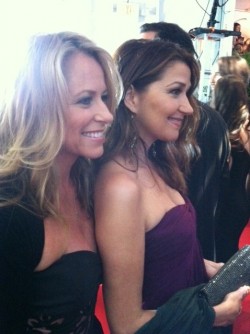 There were so many bittersweet moments.  Deana brought her mother and it made us all think of Deana’s father, the late great Fred Carter, one of the greatest guitar players of his time.  Fred was so proud of Deana, and he was most proud of her songwriting.

It made the night that much more special.  Deana became very emotional when Kenny and Grace sang You and Tequila.  She told me she’d never seen a major artist sing one of her songs.  I was stunned.  It truly brought a sweet new light to the evening.  Kenny and Grace’s stripped down acoustic version sounded incredible, but they were on the stage behind us and we had to look at their backsides the whole time! grrr…    Grace makes me want to go back to the gym.  She is in amazing shape and what a beauty… and all that talent..bah!
Earlier this week we had an even sweeter event take place. Jeff’s first son Jaime and wifeDorian had a baby!  I am to be called the yaya… stepgrandma sounds icky.  I’ve been in the family for 20 years now so I guess I need some kind of grandname.  The baby’s name is Declan James Hanna.  A good strong celtic name – Grandpa is happy bout that.  The kids are in heaven!  I knew Jaime’s wife when she was just a girl.  Her father, Harry Stinson, has played on our records and wrote hits with me…for years!  What an amazing thing. Big hippie family, ideed.  It will be fun to see what Declan has in mind for himself in the coming years. 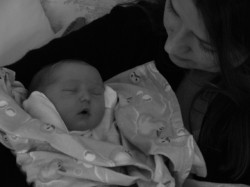 Now off to rest.  Too many parties this week for a yaya…