t all starts with a low tremolo guitar, resonating and rumbling in a way that pulls at unspoken places. Deep in your core, you know without words, this is a song – indeed, an album – that’s about loss, desolation, realizing what life is made of and the fact that even you know it just keeps coming.

If Matraca Berg has made a name for herself, it’s been for the gorgeous honesty she brings to longing, desire, survival and sometimes even fighting back. Certainly, “If I Had Wings,” the smoldering opener of Berg’s The Dreaming Fields, finds its heroine grappling with the notion, “Mama said call the preacher, I just called the law/ We all knew sooner or later, it was gonna’ be him of me…” 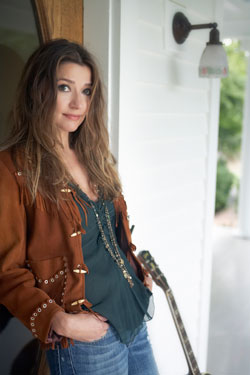 “It wasn’t about me, obviously,” allows the Hall of Fame songwriter a tinge sadly. “But being from the South, working class deep Southern roots – between that and the work I’ve done with Magdalene House and the stories you hear there… It puts a whole other spin on what you know.

“There are really very few women that I don’t see a part of myself in, no matter what they do, what their station of life. We all as women share things; you tend to know each other, have recognition on a cellular level, which defies words. You don’t even have to talk about it, you just know… and that’s the glue that holds us together.”

Matraca Berg has served as a cartographer for the hills and valleys of women’s souls, doubts, loves and sorrows for her whole life. It is how she earned her first #1 at 18 and Grammy nomination at 22. That emotional transparency can be heard all over The Dreaming Fields: in the terror of fading beauty that is “Silver & Glass,” the memories and loss that permeates “Racing The Angels,” the lost way of life that grounds the title track, even the world weary traveler seeing the commonalities in “A Cold Rainy Morning in London in June.”

The Dreaming Fields is rumination on loss. In many ways, it’s also an elegy – for her grandparents’ Wisconsin dairy farm, the innocence that has no chance in our modern world, certainly the wildly creative hippie community that once was the silent cornerstone of Nashville’s Music Row.

“It’s about good-bye, and it’s about grief. I’m one of the few people who was born and raised here,” the willowy brown-haired woman offers. “I grew up around Hall of Fame songwriters – Harlan Howard, Dave Purvey, Red Lane were around our house. It felt like they were my family, and those hallways and all that laughter and picking was my home.

“My last Grammy nomination was for Gretchen Wilson’s ‘I Don’t Feel Like Loving You Today’,” she continues quietly. “Which was me picking up where Harlan Howard left off. He was like a favorite uncle, and the way he wrote was just so… heartbreakingly good! Classic country songs, real simple and unadorned and perfect – and I didn’t want that to forget that. 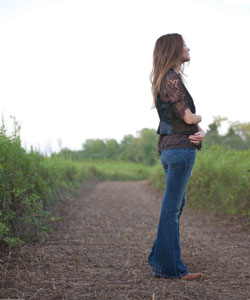 “I never thought that greatness, that classic country would get washed away in the mainstream… but it became more of an industry, more about writing with someone because of the manager or publishing company – clocking in and out almost, which is everything the Nashville I grew up on wasn’t!

“I felt a lot of grief from that… I never thought I’d land in the margins and wouldn’t understand what was going on. That wasn’t the Nashville that I knew; I might as well have been in L.A. because I felt as far away.

Certainly the redemption delivered by the river in “Oh, Cumberland,” a bittersweet song that first appeared on the Nitty Gritty Dirt Band’s Will the Circle Be Unbroken, Vol 3, is endemic of the more bucolic nature of middle Tennessee that Berg longed for. “Part of that was a friend of mine who’d moved to L.A. who lost and lonely… I wrote it as much for her, as for me… because you can’t help but miss the essence of where you’re from. Even if you’re called somewhere else, I think Tennessee girls yearn for that comfort which is that kind of country.”

Comfort is often in short supply, though none is more tortured than mother whose child is off fighting a war that makes no sense – and seemingly has no end. “People were writing all these patriotic songs,” says the woman whose music has been covered by Linda Ronstadt, Reba McEntire and Dusty Springfield. “And I was in a writing appointment thinking about all the people who aren’t about kicking someone’s ass, but rather are scared to death for people they love.

“The mother in ‘South of Heaven’… She’s terrified for her child sent overseas in a war he wasn’t really equipped for, but now is in the middle of it. The helplessness, the bravery… So many people suffer it, and no one realizes. I wanted those mothers to be seen.”

“Holy water, tears of pain can not wash away the stain
“God, You gave your only son, but You are not the only one…”

And so the inequity gets measured. Not because Berg wishes to be strident, but more because she wants to create a world where the unheard register, too. It is the commonality of the unnoticed mass in a world of look-at-me! Larger than life divas that brought Matraca Berg – whose last album Sunday Morning to Saturday Night was heralded as one of the Top 10 Albums in any genre of 1997 by TIME, People, Entertainment Weekly and USA Today – back to the table as an artist.

“My first audience was 10,000 people opening for Clint Black – and that creates a pressure,” confesses the bookish songstress. “You get into this thing of thinking it’s about being a blazing vocalist, and I put a lot of pressure on myself. But it was never who I was or what I wanted to be… and that only made my stage fright worse, which got in the way of everything else.”

Everything except the writing. And the more Matraca Berg, the more she was drawn to telling stories – and in those stories, there emerged a certain resilience that wasn’t a big pop-driven euphoria or tear-jerking sentimentality. But for the woman who’d captured the aging beautician of “Alice in the Looking Glass,” the forlorn girl who left home for a boy and a life she’d forsaken now missed “If I Were An Angel” or the widow knowing her life is mostly gone “Back When We Were Beautiful” understands the moments of falter, the fear of not being enough.

“When I dropped out after my label folded, I went home and I wrote, which is what I was born to do,” she says flatly. “The more I wrote, the more my voice emerged, songs I could sing as a songwriter/artist. The songs I was most drawn to –were not obvious for mainstream radio. But I felt deeply they deserved attention, some air. They should live somewhere other than the basement of my publishing company…”

As her perspective shifted, it seemed that Berg’s aesthetics returned to her roots in a profound way. “I found myself listening to Harvest, Blue, Pieces of the Sky was a big one – all records I was drawn to as a kid listening to my older cousins’ music. There were no rules, only feels back then: Neil Young could have the London Symphony on a song, then a steal guitar and then a great rock band.

“When I came back to them, I was stunned by the production. Or rather the lack of. Emmy’s ‘Boulder To Birmingham’ is the kind of recording I think we all aspire to, but seldom realize. It is essential and bare – and you just get lost in it.

“Certainly for me, I realized I wanted the songs to be heard, not the production – I actually took songs off the record because there was too much stuff. And it’s funny the less there was, the bigger it sounded.”

Berg realized she was onto something when after her sessions the often-jaded studio musicians would email her asking for copies of what they had played. Players like Richard Bennett and Greg Morrow – both whom have spent time on the road with Mark Knopfler – wanted copies of the emotionally vulnerable, completely bare recordings.

“And then I did a tour of the UK with Gretchen Peters and Suzy Bogguss, which I did for the fun of it mostly,” Berg reports. “I’d not had a record out in forever, but it seemed like I could go see some cool places with friends, and I was stunned to see lines of people everywhere we went wanting to buy my record.”

Emboldened by the response and the validation of the musicians, the woman who won the Country Music Association’s coveted Song of the Year for “Strawberry Wine” decided to make a record. On her terms. To be what she – not some record company with an eye on the platinum line – wanted.

“Making an album was important,” she confides. “I wanted there to be cohesion, not a checklist of singles and themes… but something that was a piece of work where you’re going through a part of people’s lives. I wanted the listener to pass through those lives, those moments and understand what was going on, how these women felt…

“Because, you know, like a lot of people, I’m at a place in my life where life is a big deal – and there’s a lot of family stuff going on. A lot of grief, aging people, and the sorts of things you can’t escape because that is life. Between being young and having it all in front of you and where it is once you grow up a little bit… That’s what life is really made of, and hopefully this record, too.”

The Dreaming Fields is fearless in its willingness to be unadorned and to use space as an instrument – allowing the emotions to be just as important as the notes being played. Occasionally sardonic – the wry mistress’s house call in “Your Husband’s Cheating On Us,” at times crumpling under the weight into the flesh of a loved one “Fall Again” and even lazing through the blues in a harmonica and steel guitar-drenched “Clouds.”

Uncompromising in its simplicity, unyielding in its knee-buckling willingness to face the moments completely, The Dreaming Fields is an atmospheric record for grown-ups, literary types, fans of songwriters who plumb the deepest part of humanity and hippies who like to sink into a record and drift. It is not about fast or loud or shiny, but rather the drift and tides that lives actually move through.